The United Nations have set Sustainable Development Goals (SDGs) to realize a sustainable society. The international community has started to introduce the "bioeconomy," which aims to reconcile global-scale issues with economic development by using biological resources and biotechnology. For example, strategic efforts are being made at the national level to make effective use of renewable resources, such as biomass, and to produce functional materials and commodity chemicals that enrich people's lives through environmentally friendly bioprocesses.

In recent years, technological innovations have occurred in DNA sequencing, bioinformatics, genome synthesis, genome editing, etc., and it has become possible to extract potential biological functions that have not been available until now. Furthermore, automation and IoT by utilizing big data and robot technology are supporting the rapid development of the bioindustry.1,2)。

In Japan, the NEDO Smartcell Project (hereinafter referred to as "this project") has been conducted since 2016, and bio-digital integration is being promoted. By defining smart cells as "biological cells whose material production capabilities are artificially maximized and optimized," basic technologies for bioinformatics, which design blueprints of smart cells, and for biotechnology, which constructs the designed cells, have been developed. For example, the developments of technologies, such as an information analysis technology for designing metabolic pathways and analyzing gene expression control networks on a computer, a long-chain DNA synthesis technology, a high-throughput material productivity evaluation technology, and a high-throughput omics analysis technology, are currently underway. These technologies have been verified to enable the creation and development of functional materials using microorganisms in a short time, at a low cost, with high performance, never before possible.

Conventionally, materials produced by microorganisms, such as amino acids, nucleic acids, organic acids, alcohols, gases, lipids, vitamins, and antibiotics have been used in a wide range of industries, such as foods, pharmaceuticals, enzymes, chemicals, and energy.

In this project, we aim to accelerate the solving of conventional issues, such as the production of new compounds that could not be produced using conventional microorganisms and the enhancement of microbial productivity, by building the "Platforms Creating Smart Cells" that create cells with highly enhanced material productivity (smart cells), using an approach combining information science and synthetic biology.

The Design-Build-Test-Learn (DBTL) cycle shown in Fig. 1 is adopted as the basic concept of the platforms. In the "Design" domain, a smart cell design system is being developed that incorporates an information analysis system for the purpose of metabolic pathway design, enzyme selection and modification, and gene expression control. In the "Build" domain, techniques are being developed, such as long-chain DNA synthesis and high-throughput construction of DNA modified microorganisms, in order to realize the production of designed smart cells. In the "Test" domain, the constructed microorganisms are subject to a productivity analysis and various omics analyses. The obtained data are used for feature value extraction, which is a technology used in the "Learn" domain, and the information is used again in the "Design." By running this DBTL cycle, the microbial breeding process is streamlined and smart cells are being created. 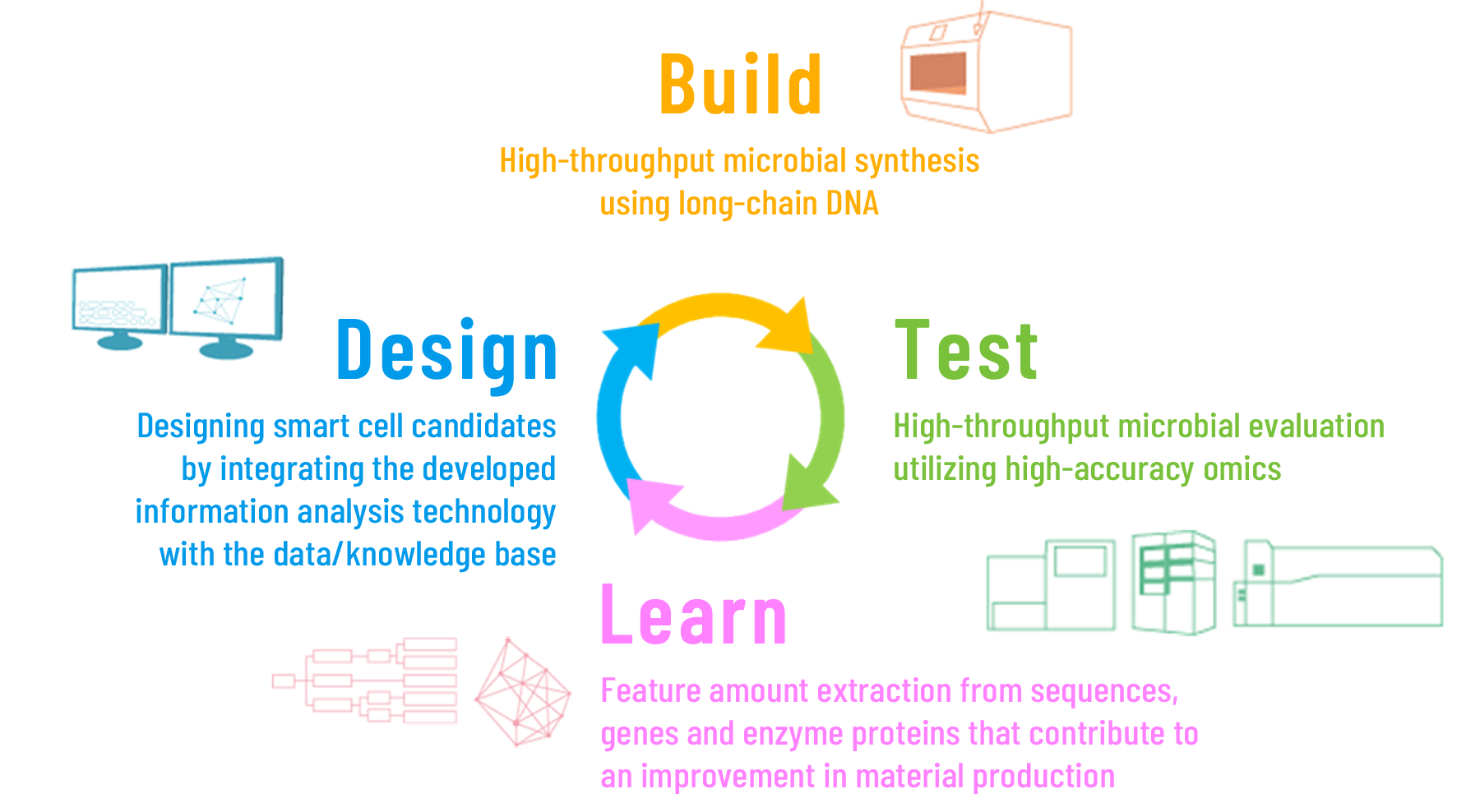 Figure 1. Overview of the DBTL cycle

The platforms are expanding the scope of its application not only to conventional host microorganisms, such as yeasts and Escherichia coli, but also to other industrial microorganisms. While each of these basic technologies is individually developed, verification tasks that are actually applied to specific materials targeted by companies or other parties are executed, in order to build the Platforms Creating Smart Cells incorporating a consistent DBTL cycle. By feeding back the verification results and various data, we are contributing to the sophistication of the platforms, and also developing a practical technology while demonstrating its effectiveness.

The next-generation industry that produces highly functional bioproducts using smart cells is called the "Smart Cell Industry." It is expected to expand into various fields, such as industrial, agricultural, and medical/healthcare fields, in the future.

Framework of the Project

This project consists of the following research and development theme.

By upgrading the speed of long-chain DNA synthesis, which is the unique technology of Japan, to ultra-high-speed, this theme aims to develop a technology for building microorganisms with high diversity in a short time, and an analysis/evaluation technology that allows productivity data and omics data necessary for information analysis to be obtained in a highly accurate and high-throughput manner.

Based on the data obtained, this theme aims to develop a "highly productive microorganism design system," which is a system for designing gene sequences that lead to the realization of the production cell models. This system consists of a metabolism model, a gene expression control model, and an integrated model (these are collectively called "production cell models"), which are designed to dramatically increase productivity to produce useful materials and to overwhelmingly increase feasibility.

This theme aims to expand the applicability of the information analysis system not only to conventional host microorganisms, such as Saccharomyces cerevisiae and Escherichia coli, but also to industrial microorganisms, in order to verify its effectiveness using specific production materials targeted by private companies and develop technologies for practical use. Moreover, this theme also aims to create a new industrial form in the bio-based material production using microorganisms, by building a foundry (biofoundry) that incorporates basic technologies.