What is the NEDO "Smartcell Project"?
One answer for maintaining the global environment and a sustainable economy

Microorganisms have the ability to produce various materials and products that are useful for people's lives, for example, seasonings, such as amino acids and nucleic acids, alcoholic beverages such as Japanese sake, enzymes used in food processing, and raw materials of pharmaceutical products. Over time, humans have gradually improved the capabilities of microorganisms.

Smart cells are microorganisms whose material production capabilities have been artificially enhanced. State-of-the-art technologies are enabling the modification of microorganisms to produce materials that they originally cannot produce.

For example, we ingest a substance called eicosapentaenoic acid (EPA) to improve blood circulation by smoothing blood. The EPA is a fatty acid mainly extracted from the blue-skinned fish, such as sardines, mackerel, and saurel. However, at present, there is serious concern about the depletion of resources of blue-skinned fish, which is the raw material for the production of EPA, and securing new raw materials has become an issue.

On the other hand, in addition to fish, algae also produce EPA. However, the efficiency of EPA production by algae is low. Therefore, if microorganisms such as yeasts (e.g., oleaginous yeasts) become able to mass-produce EPA utilizing the algae's function to synthesize EPA by artificial methods, this problem will be resolved. This allows us to mass-produce EPA without consuming the natural resources, such as sardines and mackerel.

In such a situation, the "smart cell" enters the scene. A "smart cell," meaning an "intelligent cell," is finely designed to induce biological functions that have not been used. For example, it refers to a cell rationally designed to enhance its function to produce a target material. Furthermore, industrialization will be realized by turning each cell into a material production factory.

Thus, "smart cells" have recently been expected worldwide as an excellent means to solve various problems facing the current industry. The expectation is about to become a reality by accumulating concrete cases as a result of the technological development by the "Smartcell Project."

2. We have built platforms for creating smart cells.

One of the achievements of the Smartcell Project is building platforms to efficiently advance a series of research and development processes to create a "smart cell." 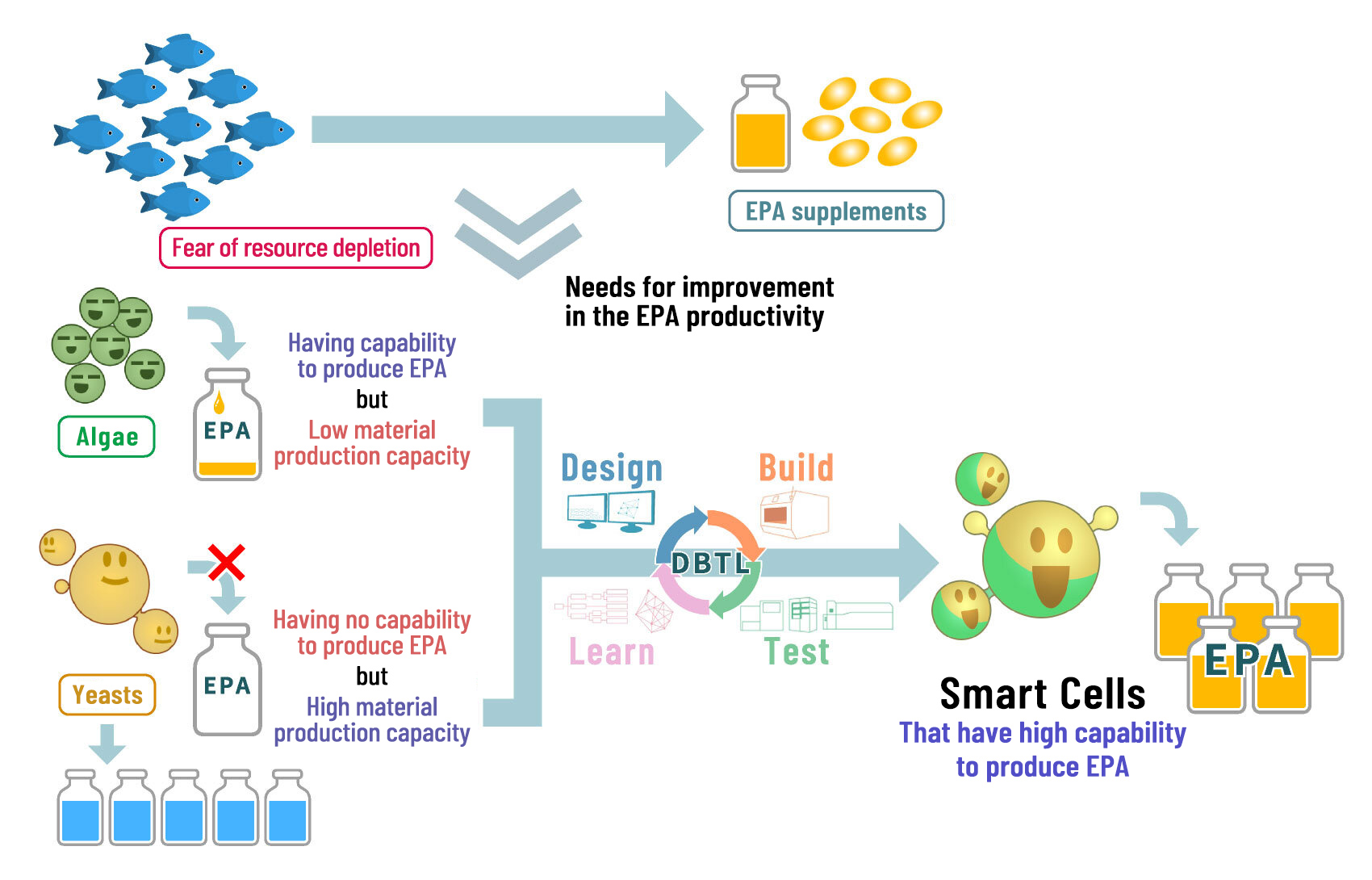 In the smart cell project, the process of creating a smart cell is classified into 4 steps, namely, "Design" → "Build" → "Test" → "Learn." After developing technologies required for each step, we have built platforms, the "Platforms Creating Smart Cells," that integrates those technologies.

By utilizing the Platforms Creating Smart Cells, which is the achievement of our research through the project over the past 5 years, new companies and researchers who wish to enter this biological production business area will realize the commercialization in a shorter period of time than before.

While the modernization brought by petroleum-based industries has played a significant role, it has raised a variety of global environmental issues. The Smart Cell Industry is also expected as a next-generation industry that can solve these problems.

Even from the standpoint of the problem of plastics that pollute the world's oceans, the industrialization of biodegradable plastics that are not derived from fossil resources is an urgent challenge. Against the use of petroleum resources that accelerate global warming and environmental pollution, in exchange for industrial development, the Smart Cell Industry, which focuses on the active utilization of biological resources and functions, will support humans in the 21st century in the literal sense.