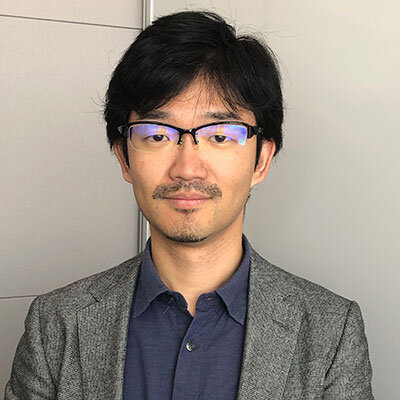 It enables designing artificial metabolic reaction pathways, and further, designing intracellular metabolism for achieving high productivity to produce target compounds. In addition, based on the blueprints, candidate genetic modifications (deletions and enhancements) can be extracted and proposed.

In the biotechnology industry, many useful compounds have been conventionally produced by utilizing microbial "fermentation." In recent years, the technology for producing useful compounds by utilizing microbial "fermentation" is used as a technology for utilizing non-fossil raw materials. This technology, where sugars, etc. that are produced through carbon dioxide fixation by plants and photosynthetic microorganisms are utilized as a carbon source, is used to have genetically modified microorganisms produce target useful compounds. Europe and the United States are leading the way in microbial production technology using this "synthetic biology," and cataloging of the production technologies using fermentative production is already in progress for many general-purpose chemicals. Concrete examples of the general-purpose chemicals that have been cataloged are general-purpose polymer raw materials, such as bioethanol, which replaces fossil fuels in automobiles, lactic acid, which is a raw material for polylactic acid, 1,3-propanediol, γ-aminobutyric acid and 4-aminocinnamic acid. Furthermore, as an example of manufacturing industrial application, a US bio-venture Genomatica and BASF (Germany) have succeeded in jointly producing more than 50,000 tons per year of 1,4-butanediol (BDO), which is a core general-purpose compound.

For the microbial production of useful compounds, it is essential to have a technology that optimally designs "metabolism" including not only the intracellular carbon flow but also the balances between energy production and consumption and between oxidation and reduction. This is because such a technology allows the understanding of the intracellular phenotype and the information obtained can be applied to the metabolism design of the target cell and to subsequent breeding. However, there is a limit to the human brain's capacity to think about more than 1,000 metabolic reactions occurring in a cell. Therefore, the computing power of computers is indispensable. Especially in recent years, due to the acceleration of the annotation process by the innovations in the genome sequencing technology and information processing technology, it has become possible to describe all metabolic reactions on a computer at the genome scale level. In other words, a technology for predicting the metabolic behavior of microbial cells in a certain environment has been established (genome scale model: GSM). Currently, research is being actively conducted by systematically performing the process from cell metabolism design using GSMs to verification by actual experiments, in order to improve the target compound productivity in a high-throughput manner. However, the existing GSMs cannot predict or design biosynthetic pathways for non-natural compounds. In addition, design using metabolic reactions that occur in non-host cells is difficult. We are developing 2 metabolic pathway design tools that can be a technology to solve these problems.

An overview of this tool is provided below (Fig. 1).

3. In the actual simulation, the target compound is described using the SMILES, and the description is used as input data. Then, based on this, the precursors are retro-synthesized randomly and comprehensively. The simulation is successful if a compound known to exist in vivo is present in the retro-synthesized precursors. In other words, if the designed artificial metabolic reaction takes place using the known biological compound as a starting material, the target compound can be biosynthesized (Fig. 1 (c)). 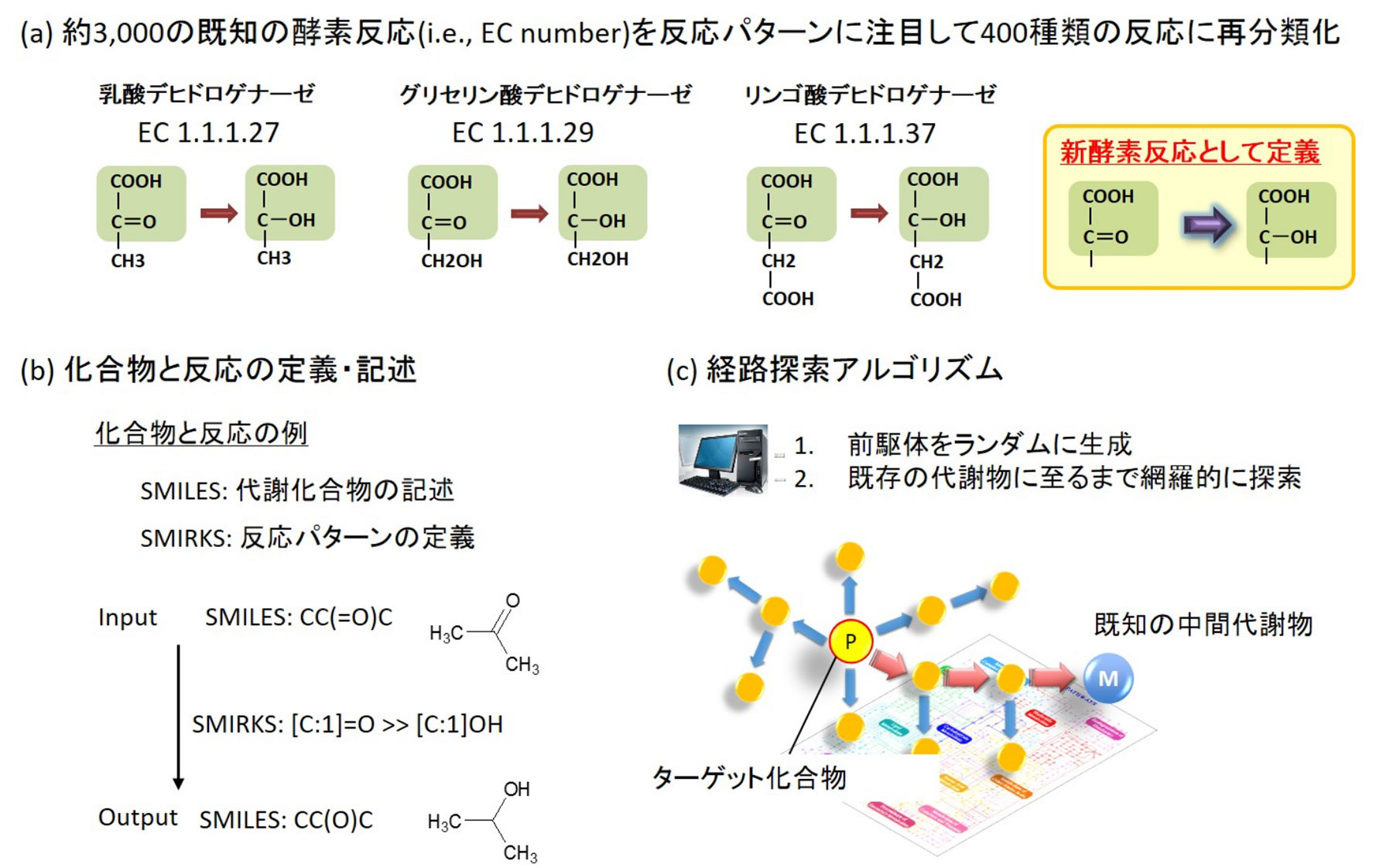 M-Path1 developed by Michihiro Araki, Professor, at Kyoto University has a different algorithm but the same concept, and is known as a tool for designing artificial metabolic pathways.

2. From the database prepared, the reaction pathways that connect to the GSMs of the host cell were selected to construct a hybrid metabolic pathway (HyMeP) (Fig. 2).

3. Using the constructed HyMeP, we have designed an efficient metabolic pathway that can achieve the maximum production of target compounds. 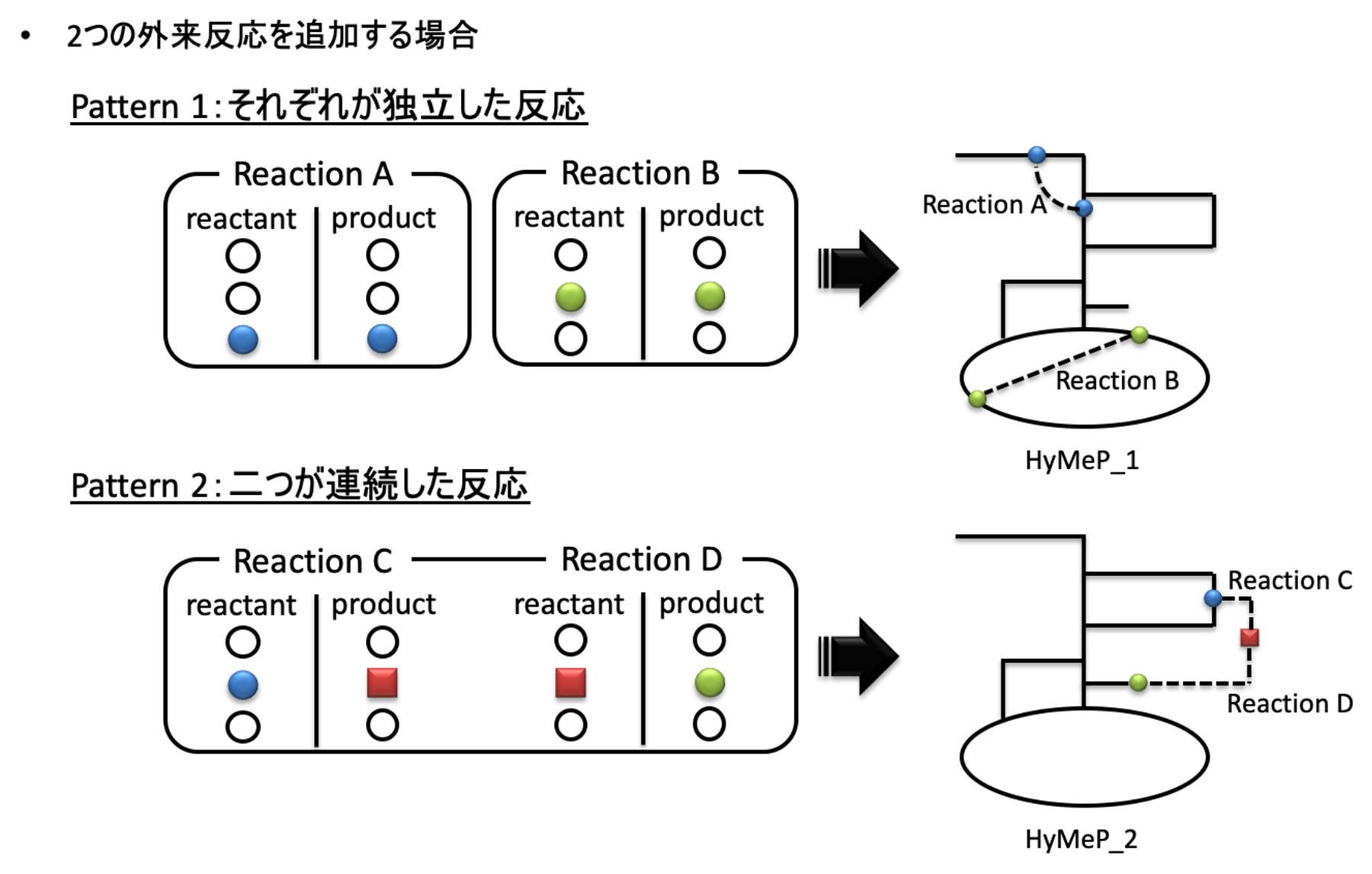