To develop highly productive strains for producing materials that are difficult to produce by fermentation in a short period of time.

We aimed to breed and develop strains producing materials that are difficult to produce by fermentation in a shorter period of time than before, by applying the smart cell design technology to Corynebacteria, which are widely used microorganisms for industrial purposes.

RITE has been working on the development of fermentation-based production technologies using Corynebacterium glutamicum.1-3 C. glutamicum is a non-pathogenic, non-motile Gram-positive soil bacillus. It was discovered in Japan as a microorganism that excretes glutamic acid into the culture medium. RITE has independently isolated the C. glutamicum R strain and determined the complete genome sequences. This time, we proceeded with the development of a production strain, using this bacterium as a production host and one of the useful aromatic compounds (Compound A) as a production target.

Compound A is not only used in the manufacture of electronic components, but also has a large market as a raw material for pharmaceuticals and perfumes. Although Compound A has such a high industrial utility value, it has never been produced at a high concentration using living organisms. This may be because it is strongly toxic to microorganisms in general and because the metabolic pathway from glucose involves many complicated steps. In addition, C. glutamicum does not originally have a pathway for the production of Compound A. Therefore, in this project, we attempted to breed highly productive strains in a short period of time, by making full use of multiple smart cell design technologies.

Thus, we discovered that Compound A could be produced in C. glutamicum, but the production level was extremely low. Therefore, we attempted the application of smart cell design technologies. We obtained a large amount of data from multiple production strains with different genotypes, by utilizing the "High-throughput (HTP) Transcriptome Analysis Technology," "High-accuracy Metabolomic Analysis Technology" and "Quantitative Targeted Proteomic Analysis Technology." Using these data and genomic information, we obtained multiple genetic modification proposals from the "Metabolic Pathway Design Technology" and "Transgene Sequence Design Technology." These proposals included by-product pathway genes to be knocked out, production pathway genes to be highly expressed, foreign genes to be newly introduced, and sequences that can increase expression levels. Based on these modification strategies, we pursued the breeding of C. glutamicum, and succeeded in significantly improving its productivity to produce Compound A. As a result, our concentration of the product exceeded the concentrations previously reported by other groups, reaching the highest concentration in the world. Although we have not applied these technologies to the production strains to date, further improvement in productivity is expected because the preliminary analysis results suggesting an improvement have been obtained in modification proposals from the "Expression Regulation Network Construction Technology," "Technology of Knowledge Extraction and Learning from Literature, etc." and "Transporter Search Technology." In addition, it should be noted that each smart cell design technology can be used in combination. Since the approach for developing each metabolic modification strategy is completely different, it is possible to accumulate the modification proposal from each technology in one production strain series in the production strain breeding process. By this property, as shown in the figure below, we have achieved gradual and significant improvement in productivity from the wild strain.

As described above, by utilizing multiple smart cell design technologies, we have achieved both the construction of production strains and a significant improvement in productivity, to produce a useful aromatic compound (Compound A), which is one of the difficult-to-produce target materials, in a short period of time. 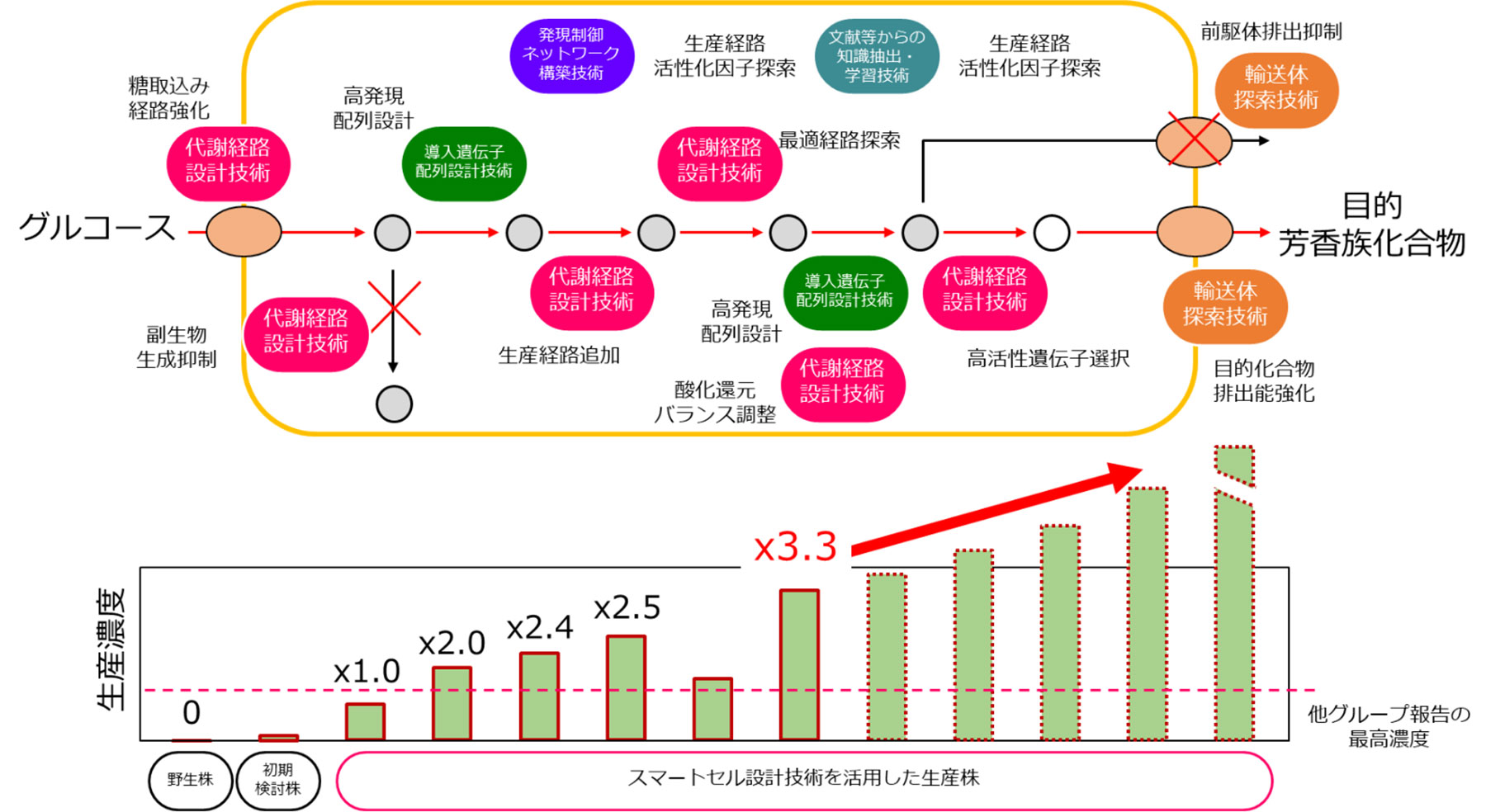